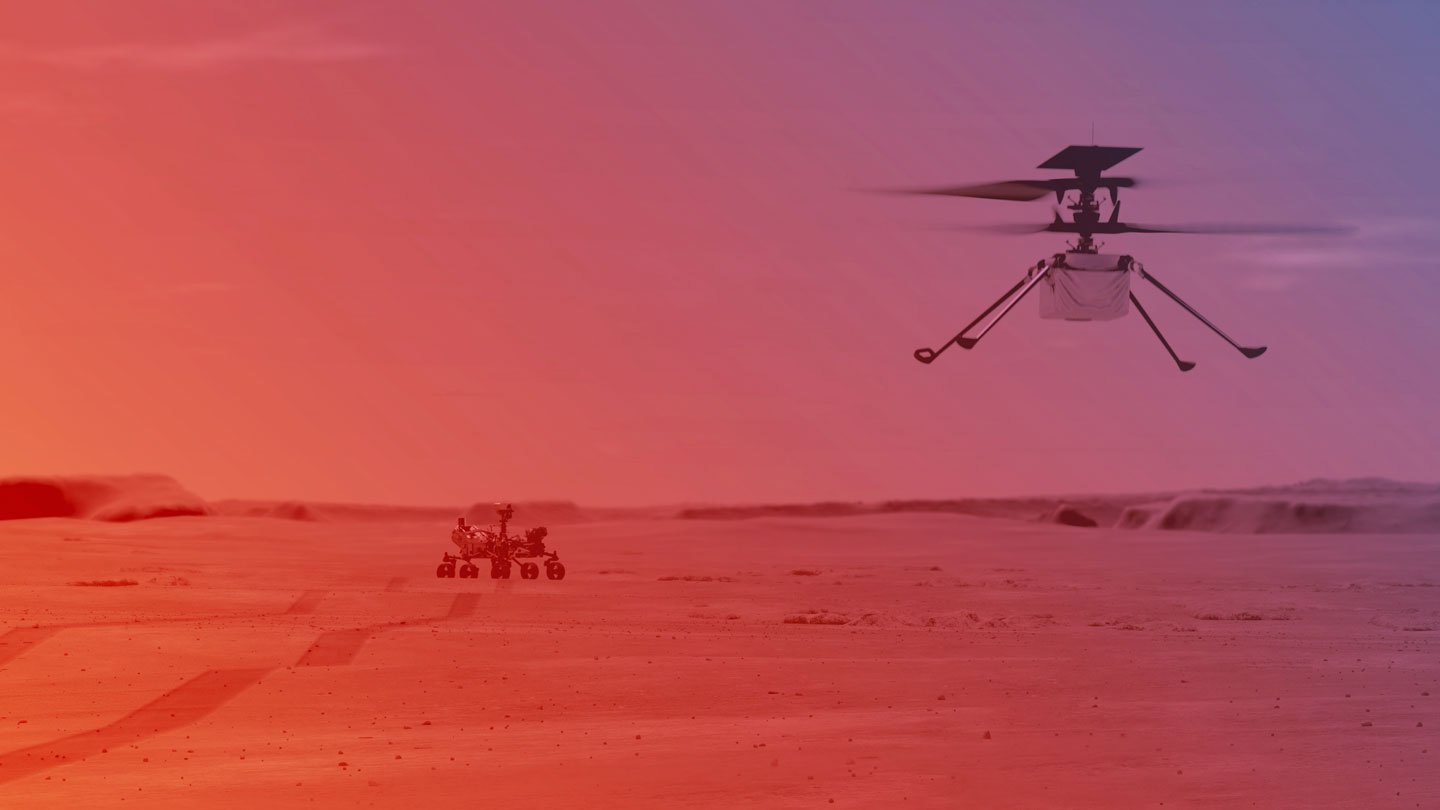 Ingenuity is still flying on Mars. Here’s what the helicopter is up to

The Ingenuity Mars helicopter was never supposed to last this long. NASA engineers built and tested the first self-powered aircraft to fly on another planet to answer a simple question: Could the helicopter fly at all? The goal was to take five flights in 30 Martian days or break the aircraft trying.

But eight Earth months into that experiment, Ingenuity is still flying and doing things no one ever expected. The helicopter, which took its first flight on April 19, is breaking its own records for distance and speed (SN: 4/19/21). It’s helping the Perseverance rover explore Jezero crater, near an ancient river delta that may hold signs of past Martian life (SN: 2/17/21). And Ingenuity is coping with changing seasons and navigating over rough terrain, two things that the flier wasn’t designed to do.

Here’s what Ingenuity has been up to on Mars.

Ingenuity is flying farther, faster and higher than it did in its first few flights. The helicopter has lifted itself a maximum of 12 meters above the Martian surface, zipped along at up to five meters per second (about half as fast as record-setting sprinter Florence Griffith-Joyner) and covered 625 meters (about a third the length of the Kentucky Derby) in a single flight. These extremes give engineers valuable information about the limits of flying on Mars.

“We are still trying to learn lessons,” says JPL robotics engineer Teddy Tzanetos, a team leader for the Ingenuity mission. “Flight after flight, we’re learning the boundaries of performance.”

Early on, Ingenuity tested its limits in a way that the flight team really didn’t plan for. During its sixth flight on May 22, the helicopter’s navigation system suffered a glitch that made it roll and sway alarmingly.

The helicopter’s navigation software keeps track of the craft’s position by taking an image, reading the time stamp on that image and predicting what the camera should see next based on landmarks from previous photos that Ingenuity took. If the next image doesn’t match that prediction, the software corrects the helicopter’s position and velocity to match up better.

Less than a minute into the May 22 flight, a single image got lost on its way from Ingenuity’s cameras to its onboard computer. That meant that the time stamps on all subsequent images were a little off. In trying to correct what it perceived as errors, Ingenuity “went on a wild joyride,” Balaram says.

Luckily, the helicopter touched down safely within five meters of its intended landing spot. The anomaly was a blessing in disguise, Balaram says. It put the helicopter through extremes of movement — “how aggressively you can move the joystick, if you will” — that the engineers would not have asked it to do on purpose, and did perfectly fine, he says.

“It’s a serendipitous thing that we got that flight experience under our belt,” Balaram says. “We have much more confidence in the vehicle.”

Originally, the helicopter team wanted to push the vehicle until it broke. But now the researchers are flying more cautiously and less often. That’s because the helicopter is currently supporting the Perseverance rover in doing science (SN: 4/30/21).

“We’re no longer in the Month of Ingenuity,” Tzanetos says. “We’re a small part of a much larger team.”

The helicopter has already proven its worth by telling the rover where not to go. Ingenuity’s ninth flight, on July 5, took the helicopter over a dune field called South Séítah that would have been difficult for the rover to drive through safely. Then, Ingenuity photographed some rock outcrops and raised ridges in South Séítah that had looked interesting in images taken from an orbiting spacecraft. Scientists thought those ridges could record some of the deepest water environments in the lake that filled the crater long ago.

In 3-D images from the helicopter, it turned out that those ridges did not show the layers that would have indicated that the rocks formed in deep water. The rover team decided to move on, saving Perseverance a long, arduous and potentially dangerous drive.

“They didn’t have to send the rover all the way to this particular target, and then realize, hey, this may not be the highest priority thing,” Balaram says.

Scouting for the rover has also taken Ingenuity over terrain that the helicopter wasn’t designed to understand. Ingenuity’s navigation software was programmed to assume that the ground beneath it is always flat because that was the type of terrain selected for that experimental first month of flight demonstrations.

“It was a perfectly reasonable simplification for a technology demonstration,” Balaram says. “But it was baked in. And now you’re stuck with a system with a flat ground assumption.”

When the helicopter is flying over a sloped surface, some features seem to move faster in its view than they would if the ground were flat, giving the helicopter a false sense of its motion. “The onboard navigation has no way of explaining it, except for thinking maybe I’m turning or spinning a bit,” Balaram says. The helicopter ends up veering to the side.

The team has come up with some work-arounds, such as choosing large enough landing zones that a precision landing isn’t necessary and slowing down when flying over rough terrain.

The air on Mars is notoriously thin (SN: 7/14/20). But since mid-September, the atmosphere in Jezero crater has been getting even thinner. As that part of Mars shifts from spring to summer, the air density has gone from about 1.5 percent of Earth’s at sea level, to about 1 percent.

That doesn’t sound like a big difference, but it’s enough that Ingenuity has had to spin its rotor blades faster to stay aloft. In October, the helicopter increased its rotor speed to 2,700 revolutions per minute, compared with a previous maximum of 2,537 rpm.

At that faster spin speed, the helicopter can fly for only 130 seconds at a time instead of the 170 seconds it managed before, without running the risk of the motors overheating.

That would be fine if the helicopter was just going to hang around the rover in one area, Tzanetos says. But the Mars duo’s next task is a race to the long-dry river delta at the mouth of Jezero crater. The Perseverance team hopes to cover hundreds of meters each Martian day. The farthest Ingenuity has covered in a day is 625 meters, and that was with the lower spin speed.

“It’ll be challenging to keep up,” Tzanetos says.

There’s no technical reason why Ingenuity can’t make it, though, Balaram says. “It’s certainly possible that one day it just won’t wake up. Or a landing will be a failure and we’ll never hear from it again because it tipped over,” he admits. “Those are rolls of the dice, there’s nothing inevitable about those. Barring that, it should keep working for many months.”

Meanwhile, engineers are already dreaming of the next Martian aircraft.

“Ingenuity is very exciting, we’re breaking a lot of ground,” Tzanetos says. “The whole point of it is to be that foundation. The important thing is what comes next.”

Current blueprints include a scaled-up version of Ingenuity that could carry more equipment and work alone or with a rover, and a large hexacopter, with six rotors arranged around a central ring. A craft like that could cover more ground more quickly than a rover, traveling distances that could take Perseverance multiple years in just a few months.

A white paper submitted to the 2023–2032 planetary science and astrobiology decadal survey — a once-a-decade review of the fields’ goals and priorities — suggests several possible missions for a Mars Science Helicopter. In one, the craft could take samples of clay minerals at a site like Mawrth Vallis, a channel thought to be carved by a long-ago flood.

Mawrth was a finalist for the last two Mars rover landing sites and is a contender for the European Space Agency’s Rosalind Franklin rover, set to launch in 2022. Clays can preserve organic material on Earth, so a mission to Mawrth could search for signs of life.

A helicopter could also explore craters with water ice deposits with slopes too steep for rover wheels. And by taking measurements at several different altitudes, the helicopter could help figure out how the atmosphere exchanges gases with the ground, which could help solve the mystery of when and how Mars lost its liquid water (SN: 11/12/20). Or a helicopter could map the magnetic field of large swaths of the Martian surface, revealing when and how the Red Planet lost its molten core (SN: 2/24/20).

And whenever astronauts get around to visiting Mars, “it might be useful to have fleets of drones zipping around the skies, carrying loads or scouting ahead,” Tzanetos says. “That’s the exciting future I’m looking forward to.”