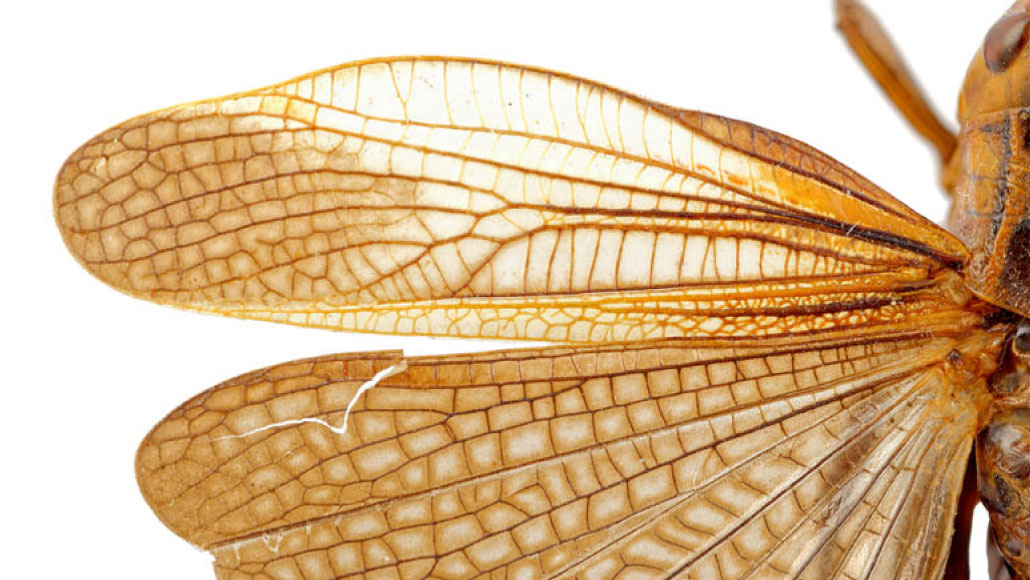 Insects had flashy, noise-making wings as early as 310 million years ago


Modern insects are versatile wing conversationalists. Crickets can scrape a leg against a wing or rub two wings together. Some grasshoppers beat their wings like castanets; others crackle and snap the thin membranes. Many butterfly wings play with light, manipulating it to hide in plain sight or reflecting it in flashes along iridescent or multifaceted surfaces (SN: 6/21/21).

Now, the discovery of the fossilized wing of a grasshopper-like insect suggests this conversation got started as far back as 310 million years ago. The wing structures resemble those of living insects that use light or sound to communicate, researchers report July 8 in Communications Biology.

Named Theiatitan azari — after Theia, the Titan goddess of light in Greek mythology — the insect was a member of Titanoptera, a group of giant predatory insects. Large-winged insects thrived in the Carboniferous Period, which spanned 359 million to 299 million years ago. Some grew to astounding sizes in the oxygen-rich atmosphere (SN: 12/13/05). (The terrifying dragonfly-like Meganeura was roughly the size of a small dog.)

T. azari predates other Titanoptera by about 50 million years. But like other insects in the group, the thin membranes of its forewings are divided by networks of veins into a mosaic of smaller sections. Based on the patterns of those mosaics, Titanoptera, including T. azari, may have had a range of communication tools at their wingtips, including crackles, flashes of light, or both, say Thomas Schubnel, an evolutionary biologist at the Institute of Systematics, Evolution, Biodiversity in Paris, and colleagues.

Scientists don’t yet know whether the ancient insects used those abilities to call to potential mates or warn off predators. But this discovery suggests there’s plenty more these ancient wings can tell them.