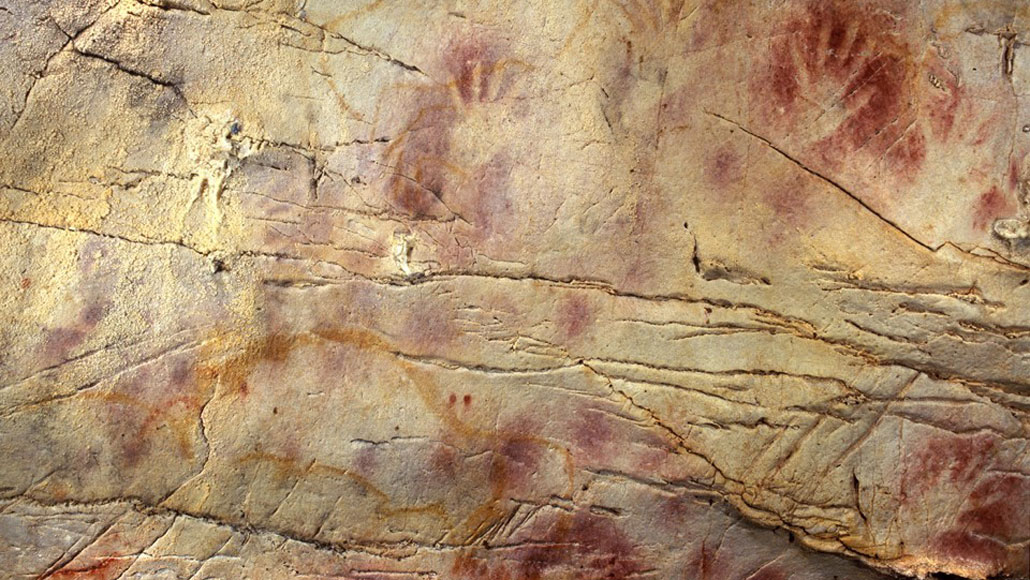 A magnetic field reversal 42,000 years ago may have contributed to mass extinctions


A flip-flop of Earth’s magnetic poles between 42,000 and 41,000 years ago briefly but dramatically shrank the magnetic field’s strength — and may have triggered a cascade of environmental crises on Earth, a new study suggests.

With the help of new, precise carbon dating obtained from ancient tree fossils, the researchers correlated shifts in climate patterns, large mammal extinctions and even changes in human behavior just before and during the Laschamps excursion, a brief reversal of the magnetic poles that lasted less than a thousand years. It’s the first study to directly link a magnetic pole reversal to large-scale environmental changes, the team reports in the Feb. 19 Science.

During a reversal, Earth’s protective magnetic field, which shields the planet from a barrage of charged particles streaming from the sun, can lose strength (SN: 1/28/19). So some researchers have suggested that these flip-flops may be linked to extinction events (SN: 11/19/20).

But evidence for this has proven elusive. In fact, “the general belief had been that geomagnetic changes had no impact on climate or anything else,” says Alan Cooper, an evolutionary biologist at BlueSky Genetics in Adelaide. One reason for that belief is a dearth of precise dates for the timing and duration of the geomagnetic event to correlate with environmental, ice core and magnetic rock records.

Enter New Zealand’s kauri tree, among the most ancient in the world. The country’s swampy bogs preserve the relics of kauri trees dating as far back as the Laschamps excursion. Cooper and his colleagues obtained cross-sections from four ancient trees recovered from a swamp at Ng­āwhā Springs in northern New Zealand, and analyzed them for carbon-14, a radioactive form of carbon. (This is the first paper Cooper has led since he was fired from the University of Adelaide in December 2019 for misconduct, allegations which he has denied.)

In particular, one massive preserved log dating to about 41,000 years ago offered up a 1,700-year-long carbon-14 record. That record revealed major changes in carbon-14 during the time period running up to and including the Laschamps excursion, the team reports. That makes sense: Increasing incoming cosmic rays — as would occur with a weakened magnetic field — also produce more carbon-14 in the atmosphere, a carbon signature which would then become incorporated into the tree’s tissues.

The team simulated how a weakened magnetic field might alter atmospheric weather patterns. The computer analysis suggested that the increase of charged particles entering the atmosphere would also increase the production of atmospheric hydrogen and nitrogen oxides — molecules that tend to consume ozone. That would reduce the ability of stratospheric ozone to shield Earth’s denizens from ultraviolet radiation. The atmospheric changes would also affect how much sunlight is absorbed at different layers in the atmosphere, leading to large-scale changes in weather patterns that would have cooled the planet.

Such effects may have in fact occurred at that time. Using the carbon-14 dates from the kauri trees, the team examined sediment, pollen, and other data from before and during the Laschamps excursion that point to sudden cooling at locations from Australia to the Andes.

Surprisingly, the most intense effects did not occur during the actual pole reversal, the team found, but in the several hundred years leading up to it, spanning about 42,300 to 41,600 years ago. During the actual reversal, the field was only about 28 percent as strong as it is today. But during that transitional period, field strength shrank to about 6 percent of its current strength. The researchers dubbed this the “Adams Transitional Geomagnetic Event” — for Douglas Adams, author of The Hitchhiker’s Guide to the Galaxy series. Adams is often associated with the number 42, said in his books to be the answer to “the ultimate question of life, the universe, and everything.”

Scientists have long debated whether climate change or human hunters were more to blame for extinction events that wiped such giant mammals as woolly mammoths and Diprotodon, a kind of super-sized Australian wombat. “It was actually one of the motivators for this study,” says study coauthor Chris Turney, a paleoclimatologist at the University of New South Wales in Sydney.

In a 2015 study by Cooper, Turney and colleagues, “we noticed that some of the megafaunal extinctions appear to cluster, and we started asking why,” Turney says (SN: 7/23/15). One such cluster of Australian megafauna extinctions, including the demise of Diprotodon and the giant kangaroo Procoptodon goliah, occurred around 42,000 years ago.

The team compared the dates of the magnetic event with previous records from ice cores that can reflect changes in solar activity. These data suggested the solar activity was at a minimum at the time. The combination of a weak magnetic field and this decrease in the sun’s output around the same time “created the perfect storm” of climate and broader environmental changes, placing a major stress on megafauna populations, Turney says. Those factors may also have led to increased competition between megafauna and human populations, as well as with Neandertals, he says.

Another possible line of evidence for a diminished ozone layer: an increasing abundance of red ochre handprints made by humans in cave paintings, the researchers note. Red ochre is thought to have been used as a sunscreen (SN: 7/3/20). There may also have been increasing use of caves between about 42,000 and 40,000 years ago, possibly as shelter from the more intense sun, the researchers report.

This is the first study to consider such a broad range of environmental consequences of extreme magnetic field changes, says Monika Korte, a geomagnetist at the GFZ German Research Centre for Geosciences in Potsdam. “The suggested links seem conceivable to me,” Korte says. But, she adds, “the biggest value of the paper is that it’s putting out several ideas that should be investigated further.”

Whether other magnetic reversals may have prompted similar upheavals in the past remains unknown, but “we hope the community will look at biological and archaeological datasets through this different lens,” Turney says. Improving the precision of isotopic dating for these events will be key — and radiocarbon dates gleaned from the New Zealand kauri trees may be able to help with other recent reversals, such as a brief reversal event called the Mono Lake Excursion that occurred about 34,000 years ago.

What long-term environmental havoc may have been wreaked by much longer reversal events recorded in ancient rocks, such the 20,000-year-long Brunhes-Matuyama reversal that began 781,000 years ago, is an even more tantalizing question, Cooper says. “The impacts may have been enormous.”