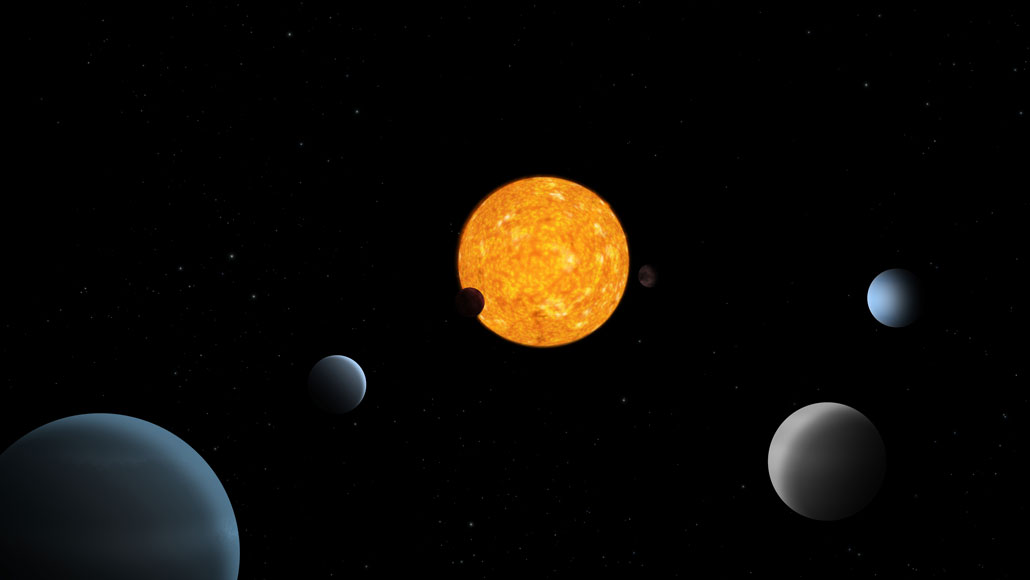 Two exoplanet families redefine what planetary systems can look like

By Bruce Boitnott on 8th February 2021


Two tightly packed families of exoplanets are pushing the boundaries of what a planetary system can look like. New studies of the makeup of worlds orbiting two different stars show a wide range of planetary possibilities, all of them different from our solar system.

“When we study multiplanet systems, there’s simply more information kept in these systems” than any single planet by itself, says geophysicist Caroline Dorn of the University of Zurich. Studying the planets together “tells us about the diversity within a system that we can’t get from looking at individual planets.”

Both systems offer planetary scientists an advantage over the more than 3,000 other exoplanet families spotted to date: All seven planets in TRAPPIST-1 and all six in TOI-178 have well-known masses and radii. That means planetary scientists can figure out their densities, a clue to the planets’ composition (SN: 5/11/18).

The two systems also offer another advantage: The planets are packed in so close to their stars that most are engaged in a delicate orbital dance called a resonance chain. Every time an outer planet completes an orbit around its star, some of its closer-in sibling planets complete multiple orbits.

Resonance chains are fragile arrangements, and knocking a planet even slightly out of its orbit can destroy them. That means the TRAPPIST-1 and TOI-178 systems must have formed slowly and gently, says astronomer Adrien Leleu of the University of Geneva.

“We don’t think there could have been giant impacts, or strong interactions where one planet ejected another planet,” Leleu says. That gentle evolution gives astronomers a unique opportunity to use TRAPPIST-1 and TOI-178 as testbeds for planetary theory.

In a pair of papers, two teams describe these systems in unprecedented detail. Both buck the trend astronomers expected from theories of how planetary systems form.

In the TOI-178 system, the planets’ densities are all jumbled up, Leleu and colleagues report January 25 in Astronomy & Astrophysics.

“In the most vanilla scenario, we expect that planets farther from the star…would have larger components of hydrogen and helium gas than the planets closer in,” says astrophysicist Leslie Rogers of the University of Chicago, who was not involved in either study. The closer to the star, the denser a planet should be. That’s because farther-out planets probably formed where it’s cold, and there was more low-density material like frozen water, rather than rock, to begin with. Plus, starlight can strip atmospheres from close-in planets more easily than far-out ones, leaving the inner planets with thinner atmospheres — or no atmospheres at all (SN: 7/1/20).

TOI-178 flouts that trend entirely. The innermost planets seem to be rocky, with densities similar to Earth’s. The third one is “very fluffy,” Leleu says, with a density like Jupiter’s, but in a much smaller planet. The next planet out has a density like Neptune’s, about one-third Earth’s density. Then, there’s one with about 60 percent Earth’s density, still fluffy enough to float if you could put it in a tub of water, and the final planet is Jupiter-like.

“The orbits seem to point out that there was no strong evolution from [the system’s] formation,” Leleu says. “But the compositions are not what we would have expected from a gentle formation in the disk.”

TRAPPIST-1’s planet septet, on the other hand, has an eerie self-similarity. Each world is roughly the same size as Earth, between 0.76 and 1.13 times Earth’s radius, astrophysicist Eric Agol of the University of Washington in Seattle and colleagues reported in 2017 (SN: 2/22/17). Plus, at least three of them appear to be in the star’s habitable zone, the region where temperatures might be right for liquid water.

Now, Agol, Dorn and colleagues have made the most precise measurements of the TRAPPIST-1 masses yet. All seven worlds are almost identical to each other but slightly less dense than Earth, the team reports in the February Planetary Science Journal. That means the planets could be rocky yet have a lower proportion of heavy elements such as iron compared with Earth. Or it could mean they have more oxygen bound to the iron in their rocks, “basically rusting it,” Agol says.

Oxidized iron wouldn’t form a planetary core, which could be bad news for life, Rogers says. No core might mean no magnetic field to protect the planets from the star’s damaging flares (SN: 3/5/18).

Astronomers may soon get a better handle on the compositions of TRAPPIST-1’s planets. The James Webb Space Telescope, set to launch in October, will probe the planets’ atmospheres (if they have any) for signs of chemical elements that would reveal in more detail what they’re made of.

The TRAPPIST-1 planets’ similarities to each other are not as surprising as the differences among TOI-178’s planets, Rogers says. But they’re still unexpected. If all the planets have identical compositions, then any formation model needs to explain that, she says.

While these systems challenge astronomers’ views of what sorts of planets are possible, Dorn says, it will take discovering more multiplanet systems to tell how weird they truly are.