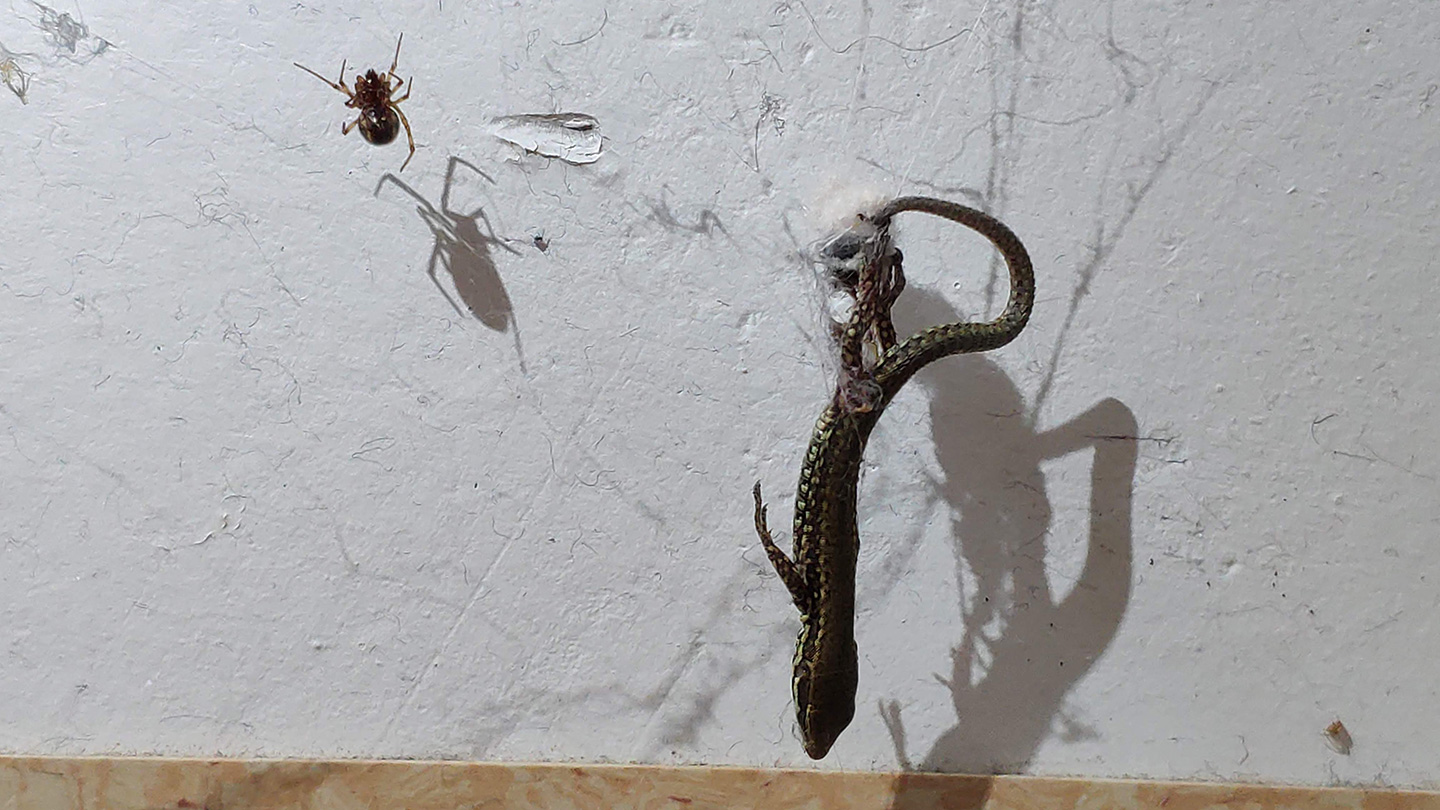 A family of spiders can catch prey many times their own weight by hitching silk lines to their quarry and hoisting the meaty prize up into the air.

Tangle web spiders, in the Theridiidae family, are masters of using silk to amplify muscle power. Their webs are “a messy tangle,” says Gabriele Greco, who studies biological materials at the University of Trento in Italy. Silk strands slant and crisscross in a cobwebby scribble.

Filming how spiders hunt from such snarls, Greco and Trento colleague Nicola Pugno focused on the most spectacular scenarios: attacks on insects that weighed up to 50 times as much as the spiders themselves. The web makers, however, could win their battles, thanks to adroit fighting, venom and lots of prey-wrapping silk. Victorious spiders also attached multiple silk threads to their prey bundle to haul the feast up to the web, Greco and Pugno report February 3 in Journal of the Royal Society Interface. Yet oddly these threads never get pulled totally taut.

To analyze the spiders’ weight-hauling moves, the researchers set up lab boxes with black walls for easy observation of white silk. Inside each box went a Theridiidae species, either a triangulate cobweb spider (Steatoda triangulosa) or a false black widow (S. paykulliana).

In the wild, both species stretch some strands from the tangle down to the ground, anchoring the strand’s sticky end. When some small, edible creature such as an ant bumbles against the strand, it breaks loose from the ground and yanks the tiny morsel upward to flail helplessly in the air. Lunch!

What really interested Greco and Pugno, however, were reports of these strands occasionally catching “giant” prey, including a snake and a mouse. To give the food-catching silk an extreme workout, researchers used big cockroaches.

A single sticky-end strand can’t jerk a heavy roach into the air, so when prey bumps the silk, the resident spider rushes to add extra strands to its big catch. In the lab box tests, spiders had to add strand after strand before researchers saw the first upward lurch. During the whole raising process, the hauling threads still maintained some give instead of being stretched very tight. That makes sense, Greco concluded, because these strands get tugged and jounced a lot by struggling prey. Super tight strands might break.

What these spiders have evolved isn’t a loading-dock pulley with a wheel, but attaching a sequence of silk strands gives the tiny animals their own way of lifting heavy burdens in little increments. After some 400 million years of evolution, spiders’ forms and uses of silk fascinate researchers like Greco, who are looking for new materials.

The new study of silk-based weight lifting strikes Symone Alexander, a chemical engineer with wide-ranging interests at Auburn University in Alabama, as “very cool.” The rounded, spoked webs on Halloween décor may be the popular notion of spider silk, but the animals have expanded the places and ways they can live with a wide range of silky innovations. Spiders have evolved silky trap doors, nets, lassos and — one close to Alexander’s heart — ultrafast slingshots (SN:3/6/19).

“Even in a single web, there are different types of silk (and glue) used to make frame lines, capture lines and anchor lines,” she says. “Spiders are ingenious.”