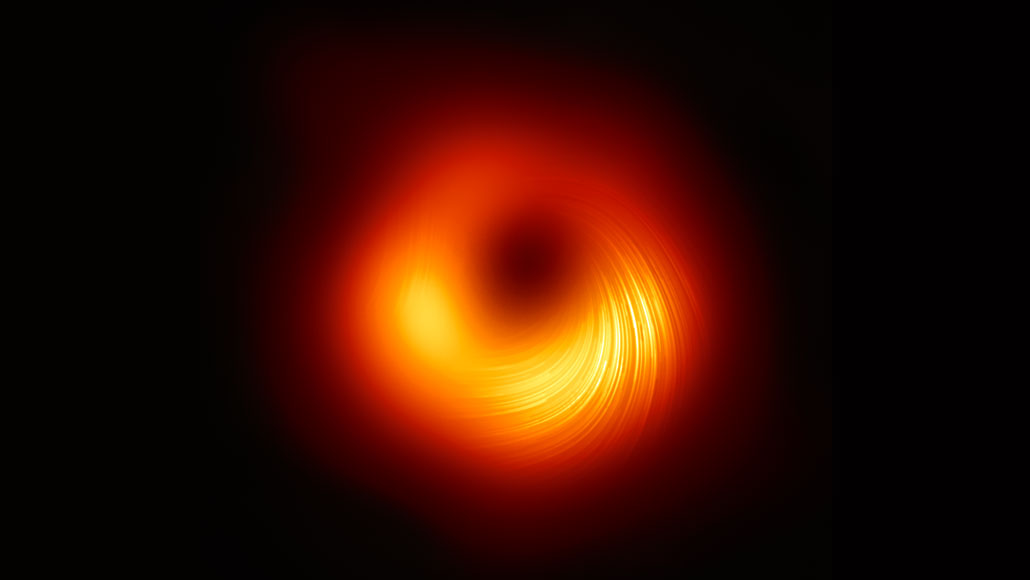 Astronomers have gotten their first glimpse of the magnetic fields tangled around a black hole.

The Event Horizon Telescope has unveiled the magnetism of the hot, glowing gas around the supermassive black hole at the heart of galaxy M87, researchers report in two studies published online March 24 in the Astrophysical Journal Letters. These magnetic fields are thought to play a crucial role in how the black hole scarfs down matter and launches powerful plasma jets thousands of light-years into space (SN: 3/29/19).

“We’ve known for decades that jets are in some sense powered by accretion onto supermassive black holes, and that the in-spiraling gas and the outflowing plasma are highly magnetized — but there was a lot of uncertainty in the exact details,” says Eileen Meyer, an astrophysicist at the University of Maryland, Baltimore County not involved in the work. “The magnetic field structure of the plasma near the event horizon [of a black hole] is a completely new piece of information.”

The supermassive black hole inside M87 was the first black hole to get its picture taken (SN: 4/10/19). That image showed the black hole’s shadow against its accretion disk — the bright eddy of superhot gas spiraling around the black hole’s dark center. It was created using observations taken in April 2017 by a global network of observatories, which collectively form one virtual, Earth-sized radio dish called the Event Horizon Telescope (SN: 4/10/19).

The new analysis uses the same observations. But unlike the black hole’s initial portrait, the new image accounts for the polarization of the light waves emitted by gas around the black hole. Polarization measures a light wave’s orientation — whether it wiggles up and down, left and right or at an angle — and can be affected by the magnetic field where the light originated. So, by mapping the polarization of light around the edge of M87’s black hole, researchers were able to trace the structure of the underlying magnetic fields.

The team found evidence that some magnetic fields loop around the black hole along with the disk of material swirling into it. That’s to be expected because “when gas is rotating, it’s basically able to carry along the magnetic field with it,” says Jason Dexter, an astrophysicist at the University of Colorado Boulder.

But, he says, “there’s some interesting component of this magnetic field which is not just following the motion of the gas.” At least some of the magnetic field lines are sticking up or down perpendicularly from the accretion disk, or pointing directly toward or away from the black hole, Dexter and colleagues found. These magnetic fields must be very strong to resist being dragged around by the whirl of infalling gas, he says.