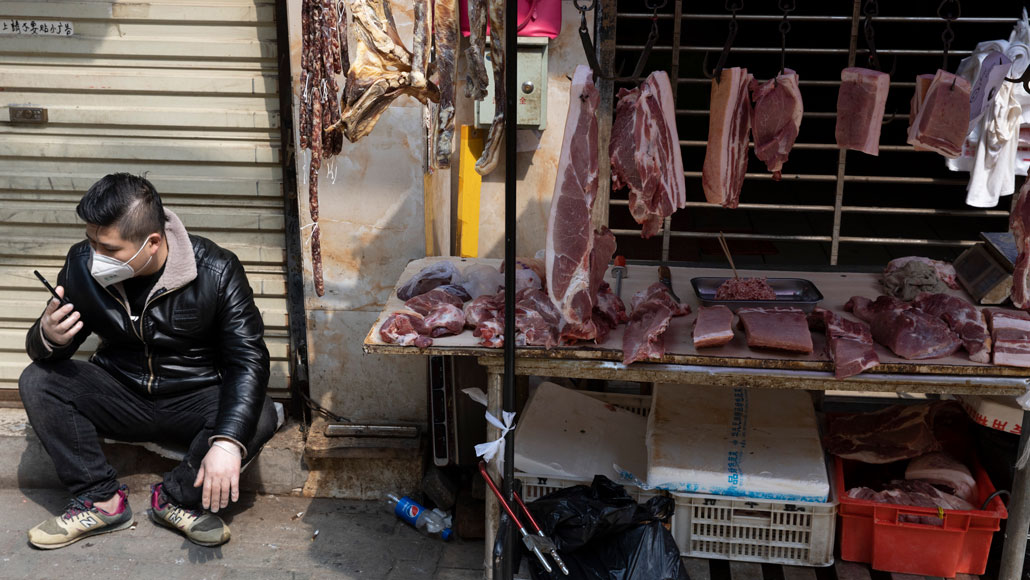 A new World Health Organization report investigating the origins of the coronavirus has raised more questions than answers for how — and where — the virus that exploded into a global pandemic emerged.

The report, released March 30, tallies where the evidence currently points: The virus, called SARS-CoV-2, probably jumped to people from bats through another animal; it likely did not come from a lab. But officials can’t yet prove — or rule out — any scenario. And questions about just how much access to potential evidence an international team of experts had on their 28-day trip to Wuhan, China, in January and February has cast a shadow on the findings.

On that trip, 17 experts with the WHO teamed up with 17 Chinese scientists to assess four potential scenarios for the origins of the coronavirus. The two leading scenarios, the team concluded, are transmission of the virus to people either directly from bats or, more likely, via an intermediate animal like a civet or raccoon dog.

A third possibility is the virus got to people through contaminated frozen food products, which the team considers less likely but says merits further investigation. The last scenario — that the virus began spreading among people following a lab accident — is “extremely unlikely,” the researchers wrote.

In a joint statement on March 30, 14 countries including the United States expressed concern that the WHO team was delayed and didn’t have access to original data and samples from people and animals. That reaction comes amid reports that the Chinese government had a hand in the mission, controlling the sites the team accessed during the visit and the report’s wording. “Scientific missions like these should be able to do their work under conditions that produce independent and objective recommendations and findings,” the countries wrote in the statement.

Some explanations may be more probable than others, but for now all possibilities remain on the table, says WHO Director-General Tedros Adhanom Ghebreyesus. The report raised questions that require further study, such as additional work to pinpoint the earliest cases of COVID-19, he noted in a March 30 meeting with WHO member states. He also said that when it came to the hypothesis that the virus came from a lab accident, “I do not believe that this assessment was extensive enough. Further data and studies will be needed to reach more robust conclusions.”

“This report is a very important beginning, but it is not the end,” he added. “We have not yet found the source of the virus, and we must continue to follow the science and leave no stone unturned. Finding the origin of a virus takes time. … No single research trip can provide all the answers.”

For now though, here are four big takeaways from the 120-page report:

1. Markets are the most probable source of major transmission of the virus.

The focus is back on markets that sell animals.

COVID-19 made its global debut amid a cluster of cases linked to the Huanan Seafood Market in Wuhan in late December 2019. Researchers tested hundreds of animals in and around the market for the coronavirus — including animals for sale such as rabbits, hedgehogs, salamanders and birds — but none tested positive. Neither did thousands of domestic or wild animals in and around Wuhan. Additionally, some early COVID-19 cases that experts identified later, after the coronavirus had begun to spread in other countries, were not linked to the market.

Together, the findings hinted that the market may have helped the virus spread among people because of large crowds but that the Huanan Seafood Market was not the original source.

Other markets may have also played a role in the virus’ spread, the investigation found. The earliest known case of COVID-19 was in a person who began showing symptoms on December 8, 2019. That person was not associated with the Huanan market but had recently visited another market.

Overall, of 174 people who were sick with COVID-19 in December, more than half had recently gone to a market, where they might have been exposed. An additional 26 percent were exposed to meat and fish or frozen food products.

The failure so far to find an animal that tests positive for SARS-CoV-2 highlights how difficult it is to identify particular species as a potential host, Peter Ben Embarek, lead investigator for the WHO mission and a food safety expert, said in a March 30 news conference. The hunt for where viruses came from takes time — sometimes years (SN: 3/18/21).

Future studies should expand the search for infected animals to wildlife farms that supplied products to the markets linked to COVID-19 cases. The people who work at the farms and those who handled the products should also be tested for antibodies to see if they once had coronavirus infections, the team suggests.

2. The coronavirus probably was not widely circulating before December 2019

There is not yet evidence that the virus was extensively spreading among people before the earliest documented case of COVID-19 in early December, the WHO team found.

Researchers combed through more than 76,000 clinical records from October to November 2019. Within those records, there were 92 possible cases of COVID-19. But 67 of those people did not have signs of an infection based on antibody tests done a year later. And all 92 were ultimately ruled out based on the clinical criteria for COVID-19. The records would not have included mild cases in people who never went to the hospital, however, so there are potential gaps in the evidence.

Additional evidence of isolated cases in countries outside China at the end of 2019 had hinted that the virus may have spread in those places before COVID-19 was first detected in Wuhan. But those reports have not yet been confirmed, the team wrote.

The timing for when the virus began spreading in China is in line with a recent study that analyzed genetic data and ran simulations of the early days of the pandemic to estimate when the virus may have emerged. The spillover from animals to humans may have happened between mid-October and mid-November 2019, Joel Wertheim and colleagues reported March 18 in Science.

After the virus transmitted from animals to humans, cases in people with mild symptoms may have helped the virus fly under the radar until December when some people fell severely ill, says Wertheim, an evolutionary biologist and molecular epidemiologist at the University of California, San Diego.

What’s more, the pandemic itself was far from inevitable, Wertheim says. In the simulations, more than two-thirds of SARS-CoV-2 transmissions from animals to humans went extinct, causing only a few infections in people before dying out. “Even a virus capable of causing a pandemic that brings the world to its knees wasn’t necessarily a foregone conclusion.”

3. The “lab-leak” hypothesis is unlikely, though hard to completely disprove

Based on a visit to the Wuhan Institute of Virology and interviews with scientists who work there, the report concludes that the virus most likely did not get its start in a lab. Though some experts have called for a full audit of the institute’s labs, the WHO mission was not designed to conduct a forensic investigation, WHO’s Ben Embarek said in the March 30 news conference.

Researchers at the institute considered the lab-leak hypothesis at the beginning of the pandemic and searched the institute’s records but did not find any evidence that anyone there was working with a SARS-CoV-2–like virus, Ben Embarek said. What’s more, antibody tests didn’t turn up any employees with signs of ever having had a coronavirus infection.

The lab leak “is possible, but there’s no evidence to support it,” says Massa Shoura, a biophysicist and genomics expert at Stanford University who was not involved with the report. Other coronaviruses that caused SARS and MERS made the jump to humans from animals, so it makes sense that it would be the most likely pathway for SARS-CoV-2 as well.

Yet accumulating the data to prove a negative may be extremely difficult. “I don’t think we’ll ever be able to provide enough evidence to convince people who are convinced that it escaped from a lab that it didn’t,” Wertheim says. “Even if you find a virus literally identical to SARS-CoV-2 [in animals] … they could still argue that that virus had previously been found and isolated and brought into a lab and it escaped just the way it was.”

4. Experts are far from knowing the coronavirus’s origins

Overall, the report offers few clear-cut conclusions regarding the start of the pandemic. Instead, it provides context for the possibilities and helps hone in on the studies researchers should tackle next.

Still, more than a year has passed since the virus made its jump to humans. That time lapse may hinder the investigation if SARS-CoV-2 no longer circulating in its reservoir, the animals that originally harbored it.

“We have to be prepared that we may never find the natural reservoir for this virus,” Wertheim says. But sometimes, all it takes is one good sample to give researchers important clues. Perhaps that’s a chance encounter with the right animal during a wildlife survey, or testing people from the right market.

Stepping even further back, researchers need to better understand the diversity of coronaviruses in bats and other wildlife in southeastern Asia, Shoura says. That means compiling a “dictionary” of the viruses found there to help researchers track viral evolutionary history, something the WHO team also recommends.

“We have only scratched the surface of these very complex studies that need to be conducted,” Ben Embarek said.